I have to admit that I hadn’t been familiar with So Divine *hangs head in shame*, but luckily for me, they got in touch with me and asked if I would test some of there products. I jumped at the chance after doing a bit of research and saw a refreshing and user friendly website. So Divine are all about high quality sex toys for everybody, regardless of relationship status or gender. They also bring their toys to you in everyday stores, popping into Boots the chemist or browsing the aisles in the supermarket could become a little more exciting! 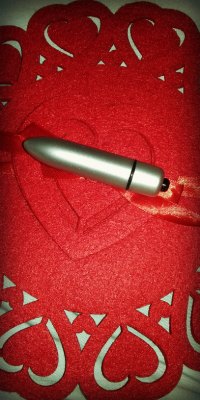 So, the Need you tonight bullet comes in a classy little box that is gender-neutral and would look pretty discreet on a supermarket shelf, though it is clear that it is a vibrating bullet. I love the little window on the back of the box that you can peer into.  The box is pretty robust, so you could continue to store it in there, but the bullet is so discreet, it wouldn’t look out of place in your make-up bag or handbag.

My first impressions of the bullet was positive. The silky, silver silicone feels luxurious and the black power button and seal, set it off nicely. As with the packaging, it is classy and gender-neutral, so much better than girly pinks and purples, especially when a bullet can be used by all genders.

The bullet has a single speed, powered by three AG13 batteries, which luckily  come with the bullet. These little watch batteries are not what I’d have in the house, so having the batteries included is a bonus. One button on the base of the battery is your power on/off. Once pressed, the bullet comes to life with a buzzy, but powerful vibration. I’m not to keen on these type of bullets, I’ve come a long way since using a buzzy bullet, but if you are new to sex toys, Need you tonight would be perfect for you. 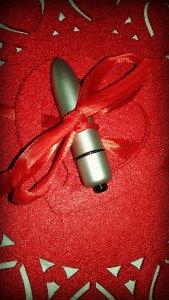 Although this bullet isn’t to my taste anymore, I’ve still had fun using it with my partner. I’ve tried a few scenarios with him and the bullet. I’ve used it in foreplay, teasing his nipples, frenulum, and perineum. The tip of the bullet is great for pin-point stimulation.

We have also discovered that the Need you tonight bullet is great for popping into one of our favourite cock rings and in some of his male masturbators. The materials of the added toys, dampen down the buzzy vibrations, but still remains powerful, so for a little vibe that I thought I wouldn’t use, it’s become a great little gem for couples play. All you need is a little imagination and you may be surprised…..I know I was!

Overall, I think the So Divine Need you tonight vibrating bullet would suit beginners, solo players and definitely couples who want to introduce a non-intimidating toy into their sexual relationship. Would love to see more classy and gender-neutral toys like this bullet.

2 thoughts on “So Divine Need you tonight bullet”